They call it the longest day and a long day it certainly was:

We got up at 3am after a couple of hours sleep. Not really my time for breakfast, but there is no other option, but to get down as many carbs as possible and start hydrating as well. We set off to the 1 hour drive to meet up with the Ulster contingent at the lake in Langen. After the usual setup in T1, we said our good-byes and there is was: the ultimate supporter T-shirt for Aileen - amazing!

I was lucky to get drawn in the start group with the pros and we were called to get into the water at 6.30am. While everybody tried to find a good spot behind the in-water start line, the anthem was played - slightly surreal. Without any further warning the race started and off we went. I took it easy until the first turn and managed to find a good position soon. After that I was able to draft for most of the first loop - I was spot on 40 minutes for the first 2.1k. The second loop was a bit more hectic as I started to get overtaken by the fast swimmers of the main field. As usual, I slowed down significantly towards the end, but managed a good enough time.

The painful 100m run into a huge T1 is on sand and on a steep uphill. I opted for the change-at-your-bike choice and avoided the tents. As soon as I entered the bike, the rain started. Hooray.

The first 30 minutes on the bike are flat and fast, and the first few hills were no problem. At 45k I heard this major unpleasant noise after a normal gear change. The entire front derailleur had broken off the frame!! I examined the damage to realise that this was quite serious. I stopped a passing motorbike and asked the referree whether he could call the official bike repair van, but was told that I simply had to wait. I decided to take the derailleuer apart to be able to distangle it from the chain. After 10 minutes of total stoppage time, I was totally soaked, covered in oil and bleeding as I cut myself on the front ring, but back on a bike only missing all big gears. This wasn't such a major issue on the uphills or when riding into the wind, but slowed me down on the long flats or downhill passages. At least I was able to continue with a number of stops as the chain kept derailing. The rain stopped at the half-way point and the wind picked up instead. The second half of the bike leg was either high-cadence due to lack of gears or high-wattage due to very strong head winds. So much about conserving energy for the run...

T2 was straightforward, but I already felt that I had spent too much energy - mentally as well aa physically - on the bike. I got into my rythm relatively quickly and was running ok for the first 15k, when things started to slow down. By the half-way point I realised that I am likely to miss my 12 hour target and started to walk. A lot. This now became more of a psychological battle and my head just couldn't cope. Lap 3 was very tough and it was good to get a lot of support from family and friends at various points. Things started to get a little better easier during the last lap, even though it was still very slow.

Finishing an Ironman is something very special and the finish in Frankfurt is no difference. Running the last quarter mile passing big crowds, the noise, the red carpet - amazing. As usual, Aileen joined me for our last few, very emotional meters and Seb Kienle put the finisher medal round her neck.

I picked up my t-shirt and grabed some salty food in the athlete's garden before joining my family. That moment is always the best after a race like that. We hung out in the finisher's area to wait for my good friend Jeff to finish his first Ironman - he was over the moon. Well done mate! We then decided to wait for the grande finale of the race, which is broadcasted live on TV. Amazing to see the last athletes to finish just under 15 hours and a great end to a fantastic day. 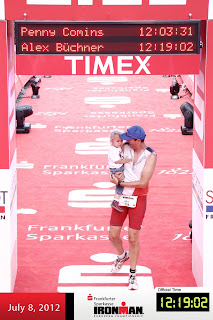 Click on the picture to get to the album...

I am totally pleased to have finished my second long distance, but I cannot be happy with my time. Yes, there are plenty of excuses - the knee surgery a few months ago, the lack of training due to the house build, the problems with the bike and the conditions. On reflection, my head wasn't as prepared as for Roth, I wasn't as hungry as I was 2 years ago. My nutrition over the last few months has been poor, which resulted in too much weight for an event like this and my overall level of fitness just wasn't good enough. It has been a very good (and painful) lesson - bring on Ironman Austria in 12 months time!
Posted by Isotonic Turtle

That is an awesome achievement whatever the time, very well done Alex! Must have been emotional crossing the finishing line with your daughter too, what a lovely photo. Well done, Mark.