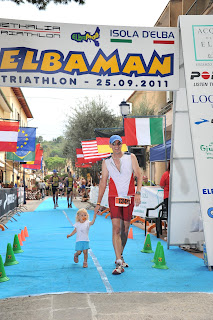 This was probably the most spectacular race I have done so far: swimming in the Mediterranean Sea, cycling in beautiful Elba and running along the beach. The time has been disappointing - again - and things went all wrong on the run - again.
Picking up race pack and checking in the bike on Saturday was a very low-key affair. No stands, no fuzz, and hardly any checks. Easy. A last 10 minute swim in the sea to get used to the salt water and swimming without wet suit, which we were told are not allowed as the water was supposed to be 25 Celsius.
As there was only a single transition area, setting up kit on Sunday morning was relatively straightforward. We made it to watch the long-distance start and then went on to get changed and started preparing for the race. To our surprise everybody was wearing a wet suit and word spread that they are allowed after all. Hooray. I was just about to go into the water for a bit of a warm-up when I realised that some Mussolini marshall was handing out dozens of 10 minute penalties as it was apparently not allowed to enter the water prior to the race. Weird, but who argues with a little dictator with a whistle and a yellow card… A bit of a panic set in when I realised 5 minutes before the start and already in the start block, that my mobile phone was still in my tri-suit. So out again, taking off the wet suit to get the phone and everything in reverse.
There was about 350 starters in the race and the start was not as hectic as expected. There was a sand bank after approximately 100m and much of the swimmers starting walking again for about 30 seconds. As always, I started to slow down a bit at the half-way point, but got through the first leg in no problem. The time was not spectacular, but ok. Through the sand, underneath some showers to get rid of the salt and approximately 400m through Marina di Campo into T1 and ...

... on to the bike for 2 tough laps. I had cycled the route once a few days prior to the race, so knew what to expect. I managed to hold back on the first lap and, apart from 2 near collisions on very technical downhill serpentines, I felt quite good. I started to feel the lack of training on the up-hill sections on the second lap and the last undulating and windy 20km were quite tough. The bike leg was supposed to be 94km, but everybody I spoke to had clocked somewhere between 96 and 98km. Must be Italian miles.
I knew that my running is extremely poor at the moment, so I started at a very moderte pace of around 5:30 km/h. Despite the heat, I felt quite good until the half-way point when I started to get sick. Every time I ran, my stomach started to cramp up and I had to revert to walking. Not sure whether this was caused by the isotonic drinks that were handed out or the fact that I couldn't go to the loo properly before the race. Either way, it was quite frustrating as my legs seemed perfectly fine.
The finish was great as Aileen joined me for the first time. We got a nice medal, a finisher shirt and some lovely food. All in all a highly recommended race in a beautiful setting.
Get the Flash Player to see this player.