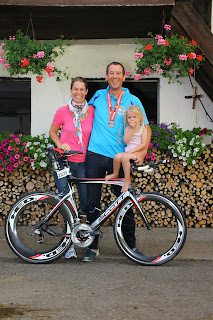 I had a really good winter with some fast 10k races and good long runs. Kandel marathon in early March was the first highlight and my race was spot on with a 3:44 thanks to Greif's training plan. My preparation for IM Austria was ok, but nowhere near as good as Roth. A mix of weird races in May, lack of time, and poor mental shape meant that Klagenfurt was never going to be the ideal race. A mediocre finish time of 11:48 was the result and also the realisation that I needed a big break from long distances. The cunning plan was to have a good rest for about a month (during which we got married!) and the start getting ready for the second half of the season focusing on short distances.

Unfortunately, it came very differently. I tore my right meniscus twice (I still don't know how) and needed surgery which resulted in little to no exercise for almost 4 months. By the time I was able to start training again in December I had lost almost all my fitness and put on 7kg!

So, the plan for 2014 is very different to any I had before: Q1 is all about getting back in shape and shed some excess weight before doing a lot of short local races (runs and tris). I *might* attempt a half-distance in September and the Heidelberg Trail Marathon in October, but I might just give them a miss if I don't feel like it. Maybe this is an age thing, but I feel that I need a season where it is not about PBs, finishing yet another Ironman race and following a strict plan, but to get my knees and back sorted, do some smaller, low-key local races, and start enjoying my favourite sport again.

Garmin UK had a 30% offer on just before xmas and as Garminator and gadget junkie I decided it is time to go for the new Forerunner 620. I must admit, it is a pretty amazing piece of technology: Half the size of the 910XT, Wifi upload and some rather interesting stats (suddenly known as running dynamics) that are generated by the new HR monitor, such as vertical oscillation and ground contact time.

All these new readings are unlikely to make me a better runner, but at least I have even more data to analyse...: 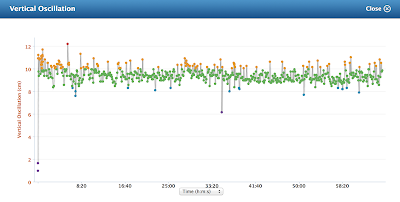 The "watch" also calculates your VO2 Max, which is apparently relatively accurate. After my 2nd run, I am sitting at 48ml/kg/min, which isn't bad (for my age), but nowhere near Lance Armstrong's bizarre 80+.
Posted by Isotonic Turtle No comments: