Last test race before IM Frankfurt. Given yesterday's 6 1/2 hour workout I expected a slower time than last year, but that didn't happen ;-) The swim was the usual battle - kicking, holding and panic attacks. I decided to wear the wet suit, which was a good choice. When I exited the water I realised that the Garmin had died. Not good. Bike split was fast and furious as expected. My legs were tired on the first 2k on the run, but felt better towards the end - shame not to know what the exact splits are... 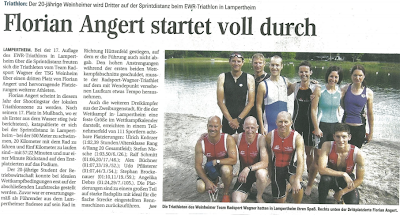 So, 2 weeks to go until the big day. I am ready. TAPER time.
Posted by Isotonic Turtle No comments:

496 starters, 239 finishers and 257(!) DNFs. 9 degrees Celsius, heavy rain throughout and wind made the bike ride after a relatively eventless swim and a long run into T1 a pretty brutal affair. My hands and feet were freezing after the first lap. From lap two onwards, I struggled to change gears or break and in the last lap I wasn't even able to take my drink bottle out of its cage, let alone unwrap any of my energy bars.

T2 became a bit of a comedy as everything was completely numb. I struggled to stop the Garmin, wobbled to my dedicated place to be greated by one of dozens of amazing helpers. She took my rain gear off and put some Dextro in my mouth before we spent about 2 minutes to get my running shoes on.

The partly undulating run went mostly through a medow, which was, of course, completely soaked as well. It took me about 30 minutes to be able to have some sort of feeling in my feet. Given the circumstances, I had one of my best half-marathons in a triathlon - the time says it all.

All in all, a very chilly affair, but a great morale booster for the Ironman in 5 weeks time. I had planned to test out my nutrition strategy, but this was impossible in those conditions.

Lesson learned? Always bring gloves, a hat and shoe covers, no matter what the forecast says. Oh, and bring a shoe horn, so you don't have to embarrass yourself in transition... 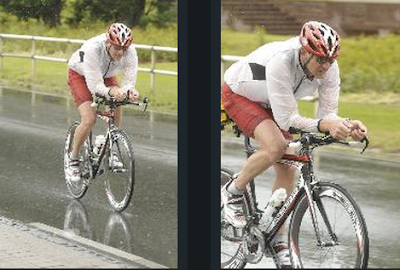 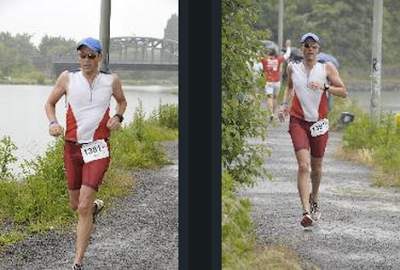 Posted by Isotonic Turtle No comments: